Contaminated water is a problem that millions face worldwide, and it can ravage the health of those who consume it. In the best-case scenario, untreated water might make a person feel sluggish or manifest in some minor symptoms. At worst, consuming water that is filled with bacteria and other germs can kill a person.

Contaminants can range from pathogens that cause an immediate illness to carcinogens that cause cancer. Either way, consuming unclean water can have many debilitating effects on the person unlucky enough to drink said water.

We often think of contaminated water in third-world countries, but unclean water exists in lakes, rivers, city supplies and even well water supplies. Simply flushing urban water supply with chlorine and other chemicals to rid water of bacteria does not guarantee that there aren’t other contaminants in the water.

For instance, there may be radium, nitrates, lead, arsenic, radon, and pharmaceuticals in the water supply. None of these are killed by chlorine, and one won’t typically see any effects of drinking these contaminants right away. Rather, it may be years before you are affected by drinking contaminated water containing the preceding chemicals.

Let’s talk about bacteria in drinking water. These are supposed to be treated at local water plants. Merus has a great study about how bacteria is prominent in water that’s saturated with iron and other minerals.

These bacteria are supposed to be removed during the treatment process, but any sort of environmental stress to the water treatment system can compromise a treatment plant and render your water supply unsafe. In such circumstances, boiling water is essential; this helps to kill bacteria such as E.coli, Coliform, microbial pathogens, viruses and parasites.

With that knowledge, what are seven dangers involved when ingesting contaminated water? What can a person do to prevent this issue?

One of the most immediate effects of drinking contaminated water is the development of an upset or sick stomach. Depending upon the contaminant ingested, a person may experience diarrhea and vomiting soon afterward. E.coli bacteria often cause this type of reaction, as do other parasites and some viruses.

Dehydration may occur as a result of the upset stomach and vomiting, and those with already-compromised immune systems may suffer increased side effects as a result of drinking contaminated water.

It should be noted that E.coli can be deadly. This is often true in the very young and the elderly, as well as in those with a compromised immunity. However, the dehydration that even healthy individuals may suffer as a result of ingesting this bacteria can be debilitating.

Skin rashes, other outward signs of exposure to contaminated water

It must be stated that some contact with contaminated water is due to swimming in such bodies of water. Water rashes are actually quite common, and they are treatable with over-the-counter anti-itch medications. However, one should take extra caution if he or she accidentally swallowed some of the water.

What are the four types of skin rashes that one might encounter after going into contaminated water? Swimmer’s rash, Cyanobacterial (or blue-green algae) rash, Pseudomonas rash, and Sea-bather’s eruption are the top skin rashes that might be the result of skin contact with contaminated water. Again, these are typically easy to treat, but one can get sick after repeated contact with this type of water.

Individuals can develop many different types of cancer when drinking contaminated water for a long period of time. A recent study attributed up to 100,000 cancer diagnoses from years of drinking water containing pollutants.

Arsenic is one of the top contaminants found in drinking water, and this one pollutant alone is responsible for up to 45,000 cases of cancer in the United States. Disinfectants such as trihalomethanes and nitrates are often present in ground water, especially in drier climates, and they are associated with a higher risk of colorectal and bladder cancer. Certain pollutants are associated with an increased risk of developing leukemia as well.

The chief concern regarding this danger is that while these pollutants may be present at what is considered a “safe” level, a lifetime of exposure to these chemicals significantly ups one’s chances of developing cancer.

What’s even more worrisome is the fact that some of these contaminants occur naturally in groundwater. Arsenic is a natural compound that is present in the soil of the earth; therefore, it is not uncommon to find traces of arsenic in tap water.

First, pregnant women are highly susceptible to developing illnesses after drinking contaminated water. Those pregnant women who consume water with high amounts of lead often give birth to children with developmental health issues. These children may have a low IQ, suffer from stunted growth, or and experience learning difficulties.

Some individuals who have long-term exposure to contaminated drinking water find themselves dealing with infertility.

This is especially true of bottle-fed infants whose formula mixture is eighty-five percent water. Consider that this is the chief component of a bottle-fed infant’s life for six to nine months, and it is understandable that many developmental delays occur as a result of said exposure.

Nitrates are a rather detrimental pollutant when it comes to babies. They cause a lack of oxygen in the blood, and this can be especially harmful to bottle-fed babies.

Pregnant women who consume contaminated tap water run the risk of their child developing spina bifida or a cleft palate. Some children are even born with missing limbs.

In addition to the upset stomach caused by E.coli, those who ingest contaminated water may suffer from cholera, typhoid, and dysentery. While Americans are not typically affected by these diseases, incidences, where the drinking supply is contaminated, can lead to these illnesses. 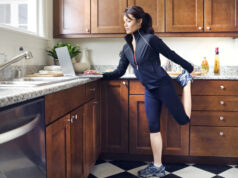 Getting Fit for Summer Post-Lockdown